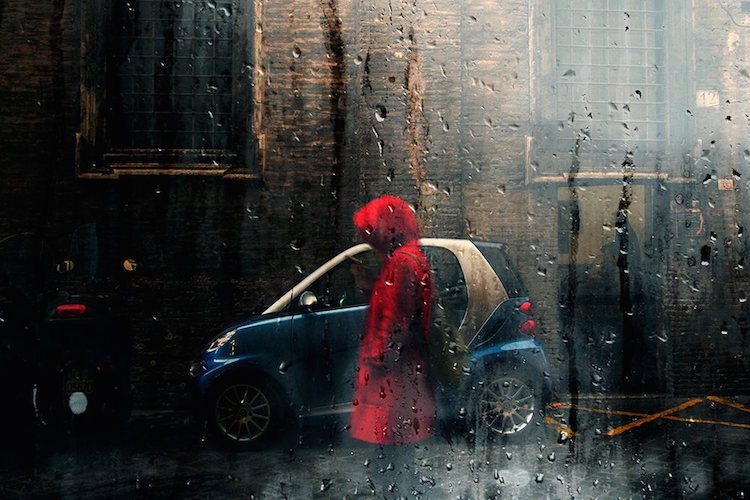 Fear is often seen as a weakness to be overcome — but for fine art photographer Brooke Shaden, fear became a launching point to a creative career. The photographer, now known for her otherworldly, often dark imagery, found herself — and her work — not by trying to overcome fear, but by trying instead to explore it. She’s reminded daily of her journey by the tattoo, “fear is the mind-killer,” running down her forearm.

Growing up in Lancaster, Pennsylvania, Brooke explains that she was never the little girl that would simply go back to sleep after her mother checked under the bed for monsters. “I went just the opposite direction — my mom would come in and say ‘there’s nothing under your bed’ and that would make me convinced that there was,” she said. “I realized I wasn’t making headway into getting rid of my fears or overcoming my fears, so I might as well invite them into my life and explore them.”

Her work often explores places that she’s afraid of, like deep water, but as a child, her creativity initially explored more positive emotion. Growing up, she would climb trees then write in her notebook on stories about bees, fairies, and trees. As she grew older, she says, those stories evolved into something darker.“Confronting what scares you and doing it anyways is how you find art that means something, that has a connection to other people”- Brooke Shaden

While telling stories was part of her childhood, she didn’t realize the potential in using stories creatively until a high school film class, where her final project went on to win a local film festival. From there, she spent 3.5 years at film school, but after trying out different positions in filmmaking, she realized she hated working on set in large groups of people.

Rather than abandoning her passion for telling visual stories, Brooke simply changed directions and picked up still photography. A photograph, she says, is simply a way to tell an entire film in a single frame. The change allowed her to work on her own and explore her fears in a creative setting, unhindered.

The ability to explore her fears, however, didn’t keep new fear from rising up in her life, however. In her first year, she paid for 14 gallery shows and never made her initial investment back on any of them. Despite what many would write off as an initial failure, she continued to work at her craft and shortly after that first year, she began working as an artist full time. Along with creating art on her own terms, she went on to write a book and to teach online and in-person workshops.

As her work continued to evolve, she received an invitation to travel to India to teach photography to human trafficking survivors. While she found the work meaningful, she also found herself feeling empty after leaving — so she launched a non-profit, The Light Space, to continue focusing on the cause.“Art is a way of reaching out and saying, ‘this is me I hope someone understands that.” – Brooke Shaden

Working with photographers from an entirely different culture than the Amish area she grew up in helped Brooke realize that art’s beauty often comes from the similarities across the human experience that transcends borders. “The most moving thing has been realizing that the stories that we tell throughout cultures is the same,” she says. “The way that we express grief is the same, the way that we express joy is the same. Once you give someone permission to tap into their emotions and create from that space, so many amazing things happen.”

Her advice to budding artists? Recognize that everyone has the same basic fears. “Confronting what scares you and doing it anyways is how you find art that means something, that has a connection to other people,” she says. “Art is a way of reaching out and saying, ‘this is me I hope someone understands that,’ and that’s why it’s so terrifying. We don’t want to put ourselves out there if there isn’t another hand to hold reaching out through the darkness, but there always is — you just have to put it in the right places and try enough times and someone will bite. I think that we perhaps give up too soon and think that it should be easy, but it shouldn’t be easy — it should be a journey.”